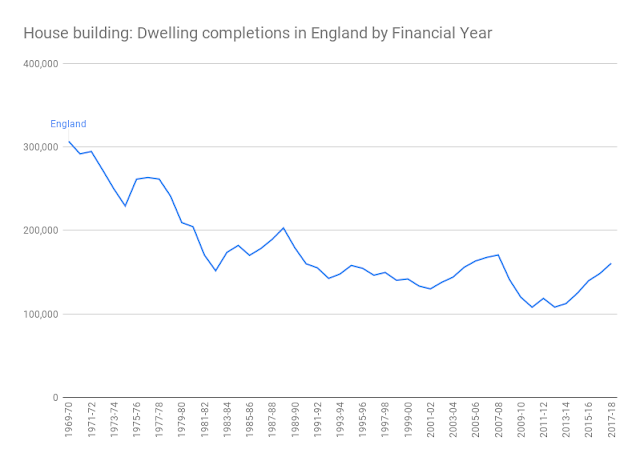 The Ministry for Housing, Communities and Local Government has today published its latest data on house building in the United Kingdom. The graph shows the number of dwellings completed by financial year in England. Data is also available for the other home nations. However, Neighbourhood Planning is a feature of the English planning system only.

Whilst many commentators will likely highlight the house-building rates fall well below those needed, and far short of government policy, at least the trend appears to be heading in the right direction.

Where the HDT shows the delivery of new homes has fallen below 95% of the district or borough's housing requirement over the previous three years, the council should prepare an Action Plan to assess the causes of under-delivery and identify actions to…
Post a comment
Read more

Where the HDT shows a district's housing delivery is less than 85%, the c…
Post a comment
Read more

These examples, and other similar cases, raise a wider question about what constitutes 'conflict' with a Neighbourhood Plan.
A recent High Court ruling, issued in September 2018, has 'tested' this issue. The claim was lodged by Chichester District Council (CDC) against the Secretary of State for Housing, Communities and Local Government, and Beechcroft Ltd. The High Court decision is available to view on the BAILII website.
In this post, I have summarised the appeal decision and High Court decision, and conclude by offering some advice to ensure your Neighbourhood Plan p…
Post a comment
Read more

The sum total of the number of approved plans shown in the table exceeds 1,000, as a small number of plans cross local planning authority boundaries and are therefore…
Post a comment
Read more

The appeal decision was issued in December 2018, granting planning permission for 96 dwellings, including 38 affordable, with areas of open space, Suitable Alternative Natural Greenspace (SANGS); children’s play area; SuDS attenuation; highway works and a new access.
The appeal site is located within the Borough of Waverley, Surrey, and the Farnham Neighbourhood Area. Development Plan The Farnham Neighbourhood Plan (FNP) was made in July 2017, and was therefore less than a year and a half old at the time the decision was issued.
During the course of the appeal, the Waverley Local Plan Part 1 (WLPP1) was adopted. This is, in effect, 'half' of a Local Plan setting out strategic polici…
Post a comment
Read more